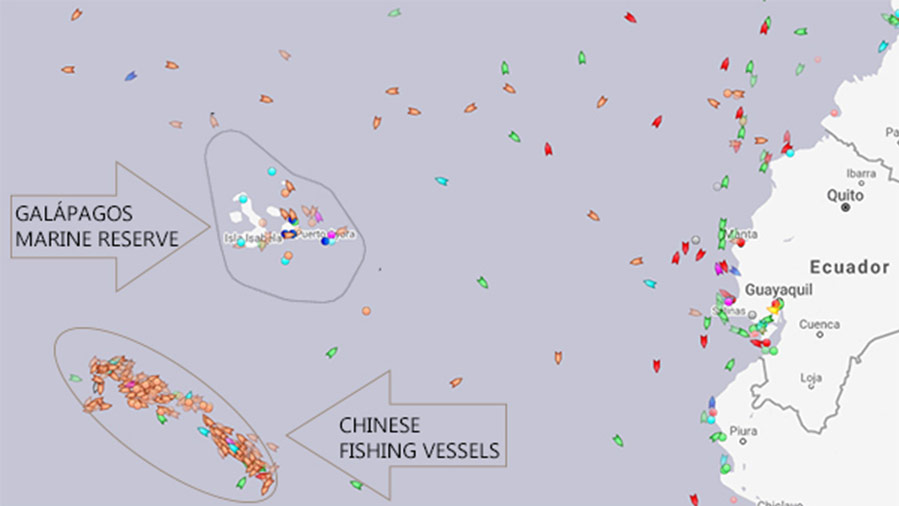 Chinese vessels travel to this area near the Galapagos Islands every year to fish — they turn off their GPS and poach the parks at night.

In the screenshot above from a live map, you can see hundreds of huge vessels surrounding the Galapagos Islands Marine Reserve. Rob Stewart brought the issue of illegal shark fishing inside this World Heritage site more than 20 years ago. Later, while filming Sharkwater Extinction, Rob worked with Marine Traffic.

Past WWF President and former Environment Minister Yolanda Kakabadse said, “This fleet’s size and aggressiveness against marine species is a big threat to the balance of species in the Galapagos.”

The Ecuadorian Navy is keeping a close eye as they are concerned the boats may encroach on the exclusive economic zone around the Galapagos.

The Galapagos Islands are a UNESCO world heritage site and includes many species. The extinction of sharks and other endangered species continues, with a favorite catch being the hammerhead shark, which is protected by CITES. In 2017 a Chinese vessel was caught inside the protected marine park with 300 tons of marine wildlife, and a large portion of it was sharks.

Ecuadorian President Lenín Moreno posted on his Twitter account: “We will work in a regional position to defend and protect the exclusive economic zone around the Galapagos Marine Reserve, one of the richest fishing areas and a hotbed of life for the entire planet #SOS Galapagos.” ~Brie Davis