IN SELECT US THEATERS FEB 1 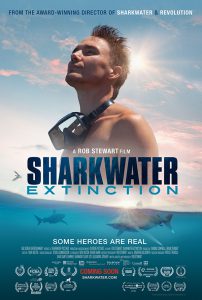 Sharkwater: Extinction (2018) is a thrilling and inspiring action packed journey that follows filmmaker Rob Stewart as he exposes the massive illegal shark fin industry and the political corruption behind it — a conspiracy that is leading to the extinction of sharks.

From West Africa, Spain, Panama, Costa Rica, France, and even in our own backyard, Stewart’s third film dives into the often violent underworld of the pirate fishing trade to expose a multi-billion dollar industry.

Shark finning is still rampant, shark fin soup is still being consumed on an enormous scale, and endangered sharks are now also being used to make products for human consumption.  Stewart’s mission is to save the sharks and oceans before it’s too late.

Sharkwater, Rob’s first film, brought the devastating issue of shark finning used in shark fin soup to the world stage. His multi award-winning film changed laws and public policy worldwide, created hundreds of conservation groups. Today more than 90 countries have banned shark finning or the trade of shark products.  Even so, Stewart finds sharks are still being fished to extinction.

Sharkwater: Extinction continues the adventure across four continents, as Rob travels through the oceans to investigate the corruption behind a multi-billion dollar industry. The crew goes through some of the world’s most dangerous fishing ports run by international crime organizations that have infiltrated the fishing industry.

Rob’s second film, Revolution, continued his quest to save sharks and the oceans. Revolution was the first feature film to platform the devastating effects of Ocean Acidification.  Climate change was well known, but scientists were just realizing the effects would be much worse than ever imagined. We were in danger of losing the coral reefs, and potentially the entire ocean ecosystem, which gives us 60% of our oxygen. Sharks, the top predator controlling the fish populations below them and the plankton that give us our oxygen, were being fished to extinction in an ecosystem they have controlled for 400 million years.

100 – 150 million sharks are killed every year, but only about half of them are reported, including endangered species. Shark populations have dropped more than 90% in the last 40 years. Without the oceans’ main predator, marine ecosystems are being destroyed beyond repair.

Sharkwater: Extinction dives into remote underwater locations to reveal the catastrophic effects humanity has had on the oceans. Illegal overfishing of sharks across the planet has deeper consequences that puts the Earth’s most important ecosystem in danger of collapsing, which threatens all life in, and above, the ocean.

Stewart dedicated his life to conservation, saying: “Conservation is the preservation of human life.  And, that, above all else is worth fighting for.” He taught the world to love the oceans and their creatures and not fear sharks through his iconic images of hugging and free diving with sharks and mantas. 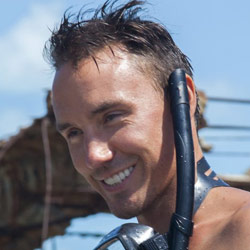 Born and raised in Toronto, Canada, Rob Stewart began photographing underwater when he was 13. By the age of 18, he became a scuba instructor and then moved on to earn a Bachelor of Science degree in Biology, studying in… END_OF_DOCUMENT_TOKEN_TO_BE_REPLACED 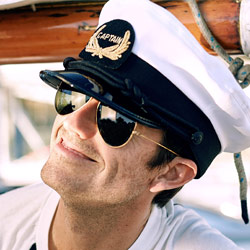 Brock Cahill, Founder of SeaChange Agency first became aware of Rob Stewart when he saw the iconic photograph of Rob freediving with sharks. Shortly after that, he saw Sharkwater (2007) and it it inspired him to reach out to Rob… END_OF_DOCUMENT_TOKEN_TO_BE_REPLACED 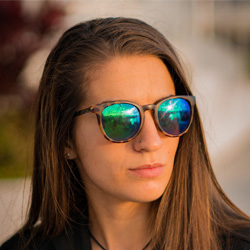 Madison Stewart, to her friends ‘Pip’ (dad’s a pirate, mum’s a hippy, so she became ‘Pippy’). She has always grown up in the oceans, living on a yacht form the age of two and then growing up on the waters… END_OF_DOCUMENT_TOKEN_TO_BE_REPLACED 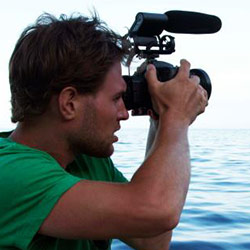 Will Allen has been in wildlife photography and cinematographer since 2003. Primarily focused on aquatic life he has worked on several adventure documentary films including Bouvetoya, The Last Place on Earth, traveling to the most remote uninhabited island on earth… END_OF_DOCUMENT_TOKEN_TO_BE_REPLACED 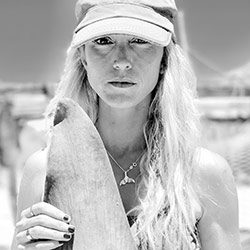 Regina Domingo is a dive instructor, sailor, conservationist, producer, photojournalist, campaigner, and passionate researcher behind the documentary Game Over Fishing. Six years ago, she decided to devote her life to the ocean after a profound experience volunteering with Park Rangers… END_OF_DOCUMENT_TOKEN_TO_BE_REPLACED