About the African Dwarf Sawshark

The African dwarf sawshark is a newly discovered species of sawshark found off the coast of Eastern Africa. The first specimen was discovered in Mozambique. Like other sawsharks, it has a long snout with teeth that point outward. The rostrum is about a third of the shark’s total size

These deepwater sharks live near the bottom at depths of 285 to 570 m, where they feed mostly on small crustaceans. Their reproductive system hasn’t been confirmed, but it’s safe to assume they’re ovoviviparous like other sawsharks.

Do you have images or videos of African Dwarf Sawsharks?
Submit them to info@sharkwater.com. 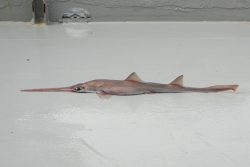