About the Angelshark (Monkfish)

The Angelshark or Monkish was first described in 1758 by the ‘father of taxonomy’, Carl Linnaeus. They are one of the largest types of Angelsharks, with females reaching up to 2.4m. Males are smaller, with a maximum length of 1.8m. They are wide-ranging and have been found in the waters around southern Scandinavia, all the way down through the Mediterranean to the Canary Islands and Western Sahara, though they are now thought to be extinct in the North Sea.

Like all Angelsharks, they have flat widebodies and wing-like pectoral fins, from which they get their name. Angelsharks are nocturnal ambush predators who lie still on the sea floor and wait until their prey is in striking range. They have small black and white spots on their grey, greenish-brown skin, which makes them well camouflaged among the sediment.

Angelsharks are ovoviviparous meaning that the pups hatch inside the mother and survive by eating the yolk-sacs of unfertilized eggs until birth. They produce litters of between 7 and 25 pups every other year. They are currently categorized as Critically Endangered by the ICUN due to their particular vulnerability to becoming trawler bycatch. Angelsharks have long been fished for their meat, which is marketed as Monkfish.

Do you have images or videos of Angelshark (Monkfish)s?
Submit them to info@sharkwater.com. 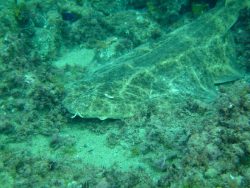