About the Angular Angelshark

The Angular Angelshark, sometimes known as the Spiny Angelshark, lives in subtropical waters off the coast of Brazil, Uruguay and northern Argentina. They are endemic to this area and are usually found at depths between 2 and 265m. They’re currently classified as endangered by the IUCN. They’re particularly vulnerable to being caught due to the unregulated fishing in Brazilian waters and because pregnant females migrate to shallow waters to give birth.

The Angular Angelshark produces between 6 and 8 pups in a litter. Their reproduction is ovoviviparous, which means the eggs are hatched inside the uterus where they remain until they are fully developed sharks. Females produce one litter every three years.

Angular Angelsharks live on a diet on bony fish, crustaceans and molluscs. When fully grown, these sharks can reach lengths up to 130cm.

Do you have images or videos of Angular Angelsharks?
Submit them to info@sharkwater.com. 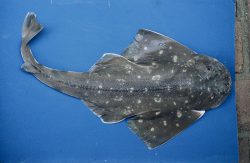