About the Argentine Angelshark

The Argentine Angelshark is endemic to the southwest Atlantic. They can be found from Brazil to all the way down to Patagonia, the southernmost tip of Argentina. Like all Angelsharks, they have wide, flat bodies and large pectoral fins, which make them similar in appearance to rays. They are currently categorized as endangered by the IUCN as Angelshark fishing is completely unregulated in Brazil, although there are maximum catch limits enforced in Argentina.

These bottom-dwelling sharks like to lie on the muddy bottom of the ocean floor and are usually found at depths between 120 and 320 metres, though very occasionally they have been observed in waters as shallow as 50 metres. They are sit-and-wait predators, meaning that they hide amongst the sand and strike only when their prey comes within range. They feed on fish, shrimp and squid.

Argentine Angelsharks produce eggs which remain inside the female until fully developed and usually give birth between 7 and 11 pups per litter. The breeding cycle of a female lasts around two years. The maximum total length for these sharks is 170cm.

Do you have images or videos of Argentine Angelsharks?
Submit them to info@sharkwater.com. 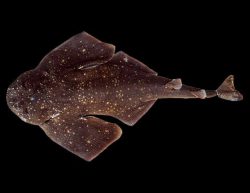