About the Atlantic Weasel Shark

Atlantic Weasel Sharks are a species of ground shark. They have a moderately long snout and large eyes with nictitating membrane to protect their eyes. Their mouth is small and has tiny serrated upper teeth and erect, cusped lower teeth.

A fully grown Atlantic weasel measures at about 140 cm, but most are commonly 100 cm long. Females become sexually mature when they’re 75 cm to 90 cm in length and males around 80 cm.

They swim at depths up to 100 m, but predominantly frequent shallow waters between 30 m to 70 m. Their main diet includes cephalopods and small bony fish.

Atlantic Weasel Sharks are viviparous. Females give birth between one to four pups, each of them about 47 cm long.

Atlantic weasel sharks are vulnerable to fishing pressure within its range. They are caught by longlines, hook and line, gillnets and bottom trawls.

The IUCN lists Atlantic weasel sharks as data deficient because more information about the species is needed.

Do you have images or videos of Atlantic Weasel Sharks?
Submit them to info@sharkwater.com. 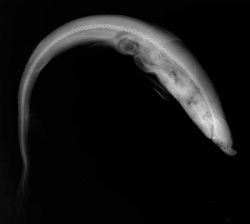