About the Australian Angelshark

The Australian Angelshark is a common species endemic to southern Australia. The population for this species has been monitored for 11 years from 1994 to 2004 which showed that the current population trend has been stable.

Australian angelsharks have a broad, vertically compressed body with large triangular pectoral fins that extend forward from their bases on either side of their gill slits. They have dark spots on the lower lobe of their caudal fin, and their pelvic fins are enlarged and wing-like. Their snout has fringed barbels beside the nostrils and a pair of spiracles.

Australian angelsharks swim at depths up to 256 m in the eastern Indian Ocean and southwest Pacific Ocean. They inhabit sandy and muddy surfaces in seagrass beds and rocky reefs. They spend their day burying themselves under sandy bottoms and ingesting any prey that come close. At night, they come out to search for food such as small fish, crustaceans and other invertebrates.

Australian angel sharks are ovoviviparous and give birth during the fall season with a litter size of up to 20 pups. Male Australian angelsharks mature by 90 cm long and grow up to 105 cm in length, while females can reach a length of 115 cm and mature by 97 cm long.

The IUCN lists Australian angelsharks  as least concern. However, there are two conservation measures that benefit the Australian angelshark: Restructuring of the Southern and Eastern Scalefish and Shark Fishery. These two management plans had implemented a reduced limit of Total Allowable Catches (TACs).

Do you have images or videos of Australian Angelsharks?
Submit them to info@sharkwater.com. 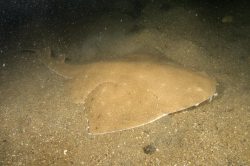