About the Australian Weasel Shark

The Australian weasel shark is an uncommon ground shark that inhabits shallow waters off the coast of northern Australia at depths up to 170 m.

Australian weasel sharks are medium sized, but with a slim greyish to bronze coloured body with a pale underside. They have sickle-shaped fins with dark tips on the second dorsal fin and caudal fin.

Australian weasel sharks are viviparous with a gestation period of six months. Females have two pregnancies per year and have an average of 16 pups a year. The pups are approximately 30 cm long at birth. Males reach maturity at about 60 cm long and females between 60 to 65 cm long.

The IUCN lists Australian weasel shark as least concern. In Northern Australia, the fisheries are well managed and have implemented a catch limit for fishers with or without a shark fishing license.

Do you have images or videos of Australian Weasel Sharks?
Submit them to info@sharkwater.com. 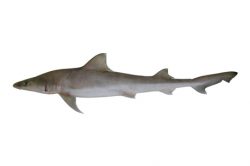