About the Banded Wobbegong

The Banded Wobbegong shark is a common bottom-dwelling carpet shark of usually found in clear water reef associated areas. This species is native to the Eastern Indian Ocean off of Western Australia.

The Banded wobbegong shark has a distinctive brownish upper body colouration with well-defined, darker brown spots surrounded by black edges, and containing paler markings. This species can grow up to a max length of about 2.5 m. This species is site-attached within its shallow water depth range of 0 to 195 m. The Banded Wobbegong shark is found in bays, on rocky reef areas, coral reefs, including lagoons and reef flats, reef faces, and reef channels, as well as around offshore islands. This species of shark is nocturnal, resting on the bottom during the day in caves, under ledges on reefs, and in trenches. It is active at night going away from resting areas.

The Banded wobbegong shark matures at about 175 cm in length. This species of shark produces young by means of giving birth to a live shark that has developed inside the parent for a 10 -11 period, with births occurring during September-October. Their litter size ranges from 17 to 47 pups, and they’re born about 28 cm long.

Banded wobbegongs are not targets in most of its range and populations are stable. They’re considered least concern.

Do you have images or videos of Banded Wobbegongs?
Submit them to info@sharkwater.com. 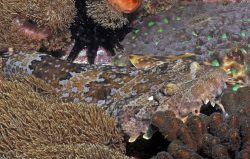