About the Bigeye Thresher Shark

The bigeye thresher is a large shark of the Alopiidae family. Its most distinctive characteristics are it’s long tail, which can be about half his total size, it’s extremely large eyes, and the grooves on its head.

Its eyes are adapted to see in very low light. The bigeye thresher spends the day in very deep waters, and moves up to the surface at night to feed. Its main prey are squid and fish, which it stuns by using its tail as a whip. It is known to swim in circles around schools of fish to make them more compact before striking them to maximize its success ratio.

Bigeye Threshers are ovoviviparous and give birth to litters of two pups, one for each uterus. The pups are born very large, usually over 1.3 m, but it takes them about ten years to become sexually mature. Their life expectancy is about 20 years, which means a female can only produce about 20 pups in her lifetime.

Because of their slow growth rates and relatively low fecundity, it extremely difficult to restore populations if they’re overfished. This species is often caught in gillnet and longline fisheries and its numbers are rapidly decreasing globally. The IUCN considers them a vulnerable species, but some populations, such as the one in the Northwest Atlantic, are consider endangered.

Do you have images or videos of Bigeye Thresher Sharks?
Submit them to info@sharkwater.com. 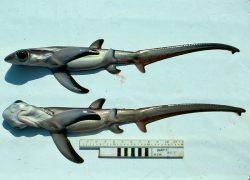 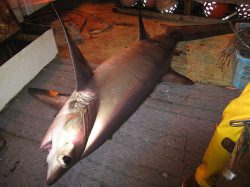 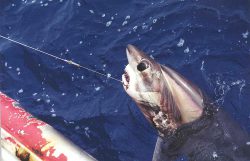