About the Bighead Spurdog

The bighead spurdog is a dogfish species found in deep waters around New Caledonia. It lives at depths of 440 to 880 m.

Very little is known abut their biology, as only a few specimens have been studied. As it name indicates, this shark has a large, broad head and long spines (spurs) on their two dorsal fins. It has both one-pointed and three-pointed dermal denticles around its body, which is unique among spurdogs, and it reaches lengths of bout 90 cm.

It is sometimes caught by longline fisheries that target red snappers. Little else is known about their population trends so they’re considered data deficient.

Do you have images or videos of Bighead Spurdogs?
Submit them to info@sharkwater.com. 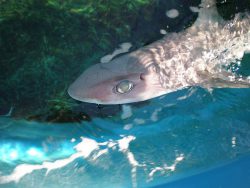