About the Bigeye Sand Tiger

The Odontaspis Noronhai, also known as the Bigeye Sand Tiger, is a rare pelagic deepwater shark that is sparsely but widely distributed in tropical and warm-temperate waters. This species belongs to the Odontaspididae family.

The Odontaspis Noronhai was described from a single specimen from Madeira, caught in 1941. Snout conical and bulbous, tip rounded. Eyes large and ovoid, nictitating membrane absent. Body color uniform chocolate brown, all fins except pectoral with thin dark edging along posterior margin. Maximum length in males is 367 cm TL and for females is 326 cm TL. Its life cycle and biology is likely to be similar to that of C. Taurus, which has been found to be particularly vulnerable to fisheries, although Odontaspis Noronhau matures at an even larger size.

This species exhibits ovoviparity (aplacental viviparity) with embryos feeding on other ova produced by the mother after the yolk sac is absorbed. Distinct pairing with embrace.

This shark is very rarely recorded, but apparently with a wide but disjunct distribution in the Atlantic and Pacific Oceans. An inhabitant of continental and insular slopes, distributed in tropical and warm-temperate waters.

Odontaspis Noronhai is rarely captured by fishing, all catches from Brazil were made by tuna longlines based in Santos. Presumably is taken occasionally by deepwater fisheries with line and net gear, including pelagic gillnets, purse-seines, and deep-set longlines.

Do you have images or videos of Bigeye Sand Tigers?
Submit them to info@sharkwater.com. 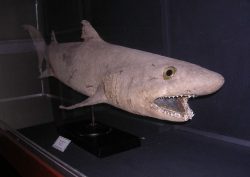 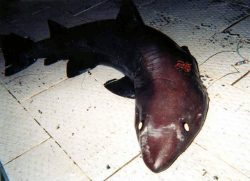