The black-gill catshark is a species of ground shark found in the Western Pacific, off the coasts of China and Japan. They’ve been found at depths of 540 to 810 m.

Like all members of the catshark family, they’re bottom feeders, have elongated cat-like eyes, and two small dorsal fins set far back. They’re mostly nocturnal and often sleep in groups during the day. Their diet consists of bony fishes and bottom-dwelling crustacean and cephalopods.

Very little is known about their biology as only a few specimens have been studied. They’re oviparous and are thought to lay just one egg at a time. The largest specimen was 85 cm long.

There is not enough confirmation to assess their population health. They might caught as by-catch by trawl fisheries, but no specific information is available. Their conservation status is “Data Deficient.”

Do you have images or videos of Blackgill Catsharks?
Submit them to info@sharkwater.com. 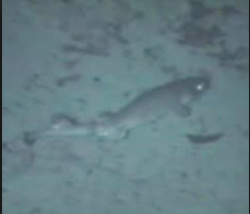