About the Blacknose shark

The Carcharhinus Acronotus, or Blacknose Shark, gets it’s name from the dark blotch on the tip of their snout (which often fade as they mature).

A tropical and warm-tempered shark, they are found from nine to 64 metres deep in the western Atlantic from southern USA through the Gulf of Mexico and the Caribbean, to southern Brazil on continental and insular shelves, mainly over sandy, shell, and coral bottoms.

Their diet consists of small fishes, including pinfish and porcupine fish, and they are preyed on by larger sharks.

They perform a ‘hunch’ display, with back arched, caudal lowered and head raised, as a possible threat display when confronted by divers.

The Blacknose Shark is reported to live as long as 19 years in US South Atlantic waters, yet 16.5 years in the Gulf of Mexico.

This species is listed as near threatened by the IUCN Redlist of Threatened Species.

They are caught in large numbers by coastal fisheries and are often targeted due to their economic value.

The major threat to this species is large removals by shrimp trawl fisheries as bycatch during juvenile life stages.  Off Venezuela, bycatch taken by shrimp trawlers was estimated at 96,000 tonnes annually but only a portion of this bycatch was actually used.

In US waters the Blacknose Shark is managed in the small coastal shark complex under the National Marine Fisheries Service: Federal Fisheries Management Plan for Atlantic Tuna, Swordfish and Sharks.

Its decreasing population trend should be further monitored.

Do you have images or videos of Blacknose sharks?
Submit them to info@sharkwater.com. 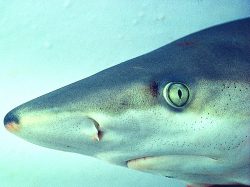