About the Blacktip Reef Shark

The Blacktip reef shark is a migratory, saltwater, reef-associated, subtropical shark that inhabits shallow water close inshore on coral reefs. Native to the Indo-Pacific, it is found in areas like The Red Sea, East Africa, Hawaii, Japan and Australia. The Blacktip reef shark is near threatened due to being targeted in inshore fisheries in India and Thailand for meat as well as its fins for shark-fin soup.

Biology and Behaviour:
The blacktip reef shark is a small shark with a short, bluntly rounded snout, oval eyes, and narrow-pointed teeth. All fins on this shark have black or dark brown tips. This species reach a max length of 200cm and feeds on fish as well as crab, lobster, octopus and other mollusks.

It’s found in depths of 20-75m, and occurs singly or in small groups.

Reproduction:
Blacktip reef shark give birth to live young after a gestation period of 8 to 9 months, bearing 2 to 4 young per litter. The size of the young at birth range from 33 to 52cm in length and reach maturity they’re 91 to 120 cm in length.

Conservation:
No management or conservation plans are made for the future according to the IUCN list.

Do you have images or videos of Blacktip Reef Sharks?
Submit them to info@sharkwater.com. 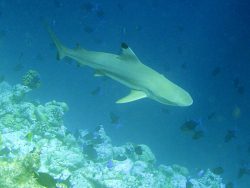