About the Blacktip shark

The Blacktip shark is a inshore and offshore shark found on or adjacent to continental and insular shelves. They are often found off river mouths and estuaries, muddy bays, lagoons, and coral reef drop-offs. This species is know to be bottom and reef-associated.

Native to the Western and Eastern Atlantic, Indo-Pacific and the Eastern Pacific, this shark is near threatened due to frequently being captured for its meats and fins.

The Blacktip shark has a long narrow pointed snout, long gill slits and pointed upper teeth. The fin tips of this shark are dusty and black. This species can grow up to 275cm in length and weight up to 122.8kg. On average they live up to 12 years. The Blacktip shark is an active hunter in midwater areas, usually found at depths of 0 to 30 m but can dive up to 100m. They feed mainly on open water, bottom fish as well as small shark and rays. This species has been affiliated with very few attacks but can be dangerous if provoked

Blactip sharks are viviparous. Their gestation period is about 10 to 12 months, bearing up to 10 young per litter. The size of the young at birth range from 38 to 72cm in length. Female Blacktip sharks drop their young inshore, and are commonly found along beaches.

Conservation: They’re managed in limited fisheries in Australia and USA.

Do you have images or videos of Blacktip sharks?
Submit them to info@sharkwater.com. 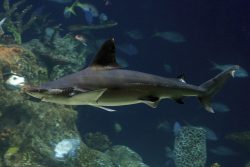