About the Blind Shark

The Brachaelurus Waddi, also known as the Blind Shark, is one of the two species of Carpet sharks in the family Brachaeluridae, along with the Bluegrey Carpetshark.

This shark has a stocky body and a wide flattened head with a blunt snout. Its small and oval eyes are situated high on the head and have strong ridges underneath. The nostrils are located almost at the tip of the snout and have long barbels in front and well-develop flaps and grooves around the opening. The mouth is small almost transversed with 32-34 upper tooth rows and 21-29 lower tooth rows; each tooth has an upright awl-shape. The pectoral fins are large and broad, the two dorsal fins are roughly equal in size and have rounded apices and angular free rear tips. The pelvic fins are rounded and almost as large as the pectoral fins. The anal fin is half the size of the dorsal fin and the caudal fin comprises about a quarter of the of the total length. The dermal denticles are large, giving the skin a rough texture.

The Blind Shark is ovoviviparous, embryos feed solely on the yolk. With 7-8 young in a litter, this species has a distinct pairing with embrace.

Usually found close to the inshore in tide pools and at the surf line, but sometimes deeper. Prefers rocky shortline areas and coral reefs, barely deep to cover its body, to a depth of 73 m, though it has been recorded as deep as 140 m. Juveniles are common in high-energy urge zones. It feeds on small reef invertebrates, including crabs, shrimps, cuttlefish, squid and sea anemones, and small fishes. It thrives in aquaria and is capable of surviving out of the water for a long time.

This species is not targeted or marketed commercially. The flesh is reported to be unpalatable and recreational fishing is thought to have little effect on the species. The Blind Shark is able to remain out of water for extended periods of time (up to 18 hours), this apparent hardiness implies that the species could survive trawl capture more readily than other species if successfully returned to the water.  The blind shark is likely to occur in a number of marine protected areas including Queensland’s Moreton Bay Marine Park and several marine parks in New South Wales. Although this species is not currently at risk of extinction, research is needed to identify the level of interaction this species has with fisheries as bycatch and to provide more information on its status.

Do you have images or videos of Blind Sharks?
Submit them to info@sharkwater.com. 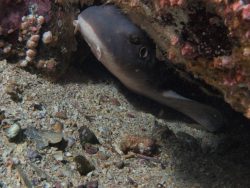