About the Blue Shark

Also known as the Blue Shark, the Prionace Glauca is one of the most wide-ranging shark species, being found throughout tropical and temperate waters including in the Indian, Atlantic and Pacific Oceans and the Mediterranean Sea. They can be found from the surface to 350 metres in depth, in water temperatures ranging from 7 to 21 degrees Celsius.

The Blue Shark is the most commonly eaten shark in the world and is the most popular in sport fisheries in the US, used for game fishing by sport anglers with a rod and reel and in recreational fisheries.  It is marketed fresh, smoked, dried or salted; its meat is utilized for human consumption; used for fishmeal and liver oil; it’s fins used for shark-fin soup, and its hides are used for leather.

Blue Sharks have one of the fastest growing rates of all sharks, generally reaching maturity at 5 years old. Produced from litters of about 35 pups, these sharks are 35 to 40 cm in length at birth, and on average grow to 335 cm long and up to 240 kg in weight.

In the wild, Blue Sharks have an average lifespan of 15 to 16 years, but in captivity only live to about 8 years old.

Blue Sharks are top-level predators that help to regulate prey populations in the marine pelagic environment making them a major contribution in the ecosystem.

Blue Sharks are mainly caught as bycatch in high-seas longline and driftnet fisheries, are valued commercially for their fins, squalene (liver oil), skin, cartilage, and their teeth and jaws. However, there are some countries that readily consume Blue Sharks such as Spain, Brazil, Italy and France.

The high abundance and worldwide distribution of this species offers a relative buffer against extinction. Yet if bycatch in high seas fisheries does not come under strict monitoring and control, some stocks may be threatened in the future. To date, the IUCN Redlist for endangered species lists the Blue Shark as near threatened.

Do you have images or videos of Blue Sharks?
Submit them to info@sharkwater.com. 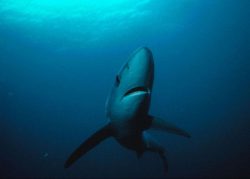 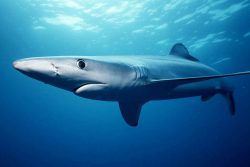