The Brachaelurus Colclough’s shark, also known as the Colcloughs Shark or Bluegrey Carpetshark, is a species presently known from only 50 records, mainly found in the east coast of Australia. This species belongs to the Brachaelurus family.

This species reaches a maximum size of 85 cm TL. Females mature from 54.5 cm TL and males from 61 cm TL. Size at birth ranges from 17 to 19 cm TL.  Age and growth data are not known as of the date of the writing of this article.

This species is ovoviviparous with litter sizes of 6 to 7. Recent research on the Blind Shark, its close relative, suggests a biennial or triennial reproductive cycle. Embryos feed solely on the yolk.

This shark is endemic to a small area of the east coast of Australia from Byron Bay, New South Wales, to the Hardline Reefs, Queensland.

Bluegrey Carpetshark occurs in inshore waters of <4 m depth out of 217 m. It is a nocturnal species, which shelter on rocky reefs during the day and forages around the reef and surrounding substrates, including seagrass beds, during the night.  Despite a long history of surveys and research within its distribution, the species is rarely encountered.

Most of its distribution has long been subject to trawling and other fishing pressure.

TheBluegrey Carpetshark receives refuge in marine national parks or sanctuary zones of marine protected areas that overlap with its distribution. In particular, Moreton Bay Marine Park is of critical importance to the conservation of this species; 15% of the park is protected as marine park zones, with significant other areas where trawling is not permitted.  This species is assessed as vulnerable on account of a suspected continuing decline and a small population size that is subject to a number of threatening processes.

Do you have images or videos of Bluegrey Carpetsharks?
Submit them to info@sharkwater.com. 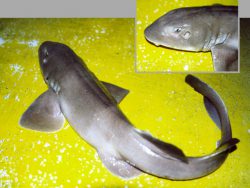