Bluntnose six-gill shark are a widely distributed species of cow shark. They’re found in the temperate and tropical seas of the continental shelves of Pacific, Atlantic and Indian Oceans. It occurs from the surface to as deep as 2,000 m.

It feeds on a number of animals including other sharks, rays, dolphinfish, cod, squids, crabs, sea cucumbers and much more. It sometimes also eats seals. They haven’t been known for any shark bite incidents to humans but have been known to swim up to the divers and examine them.

This shark becomes sensitive to light with increase in size. Adults could become agitated when exposed to even a little amount of intense light. But further investigation on this is required as these sharks have been observed around Bermuda and California in well lit places.

This shark is an oviviparous species and has a very large litters, which range from 22 to 108 pups with a size of 65-74 cm at birth. Males mature at 315 cm and females at 420. Due to their preying habits, some mechanism of separation of larger and smaller pups undoubtedly occurs.

The young tend to be found in shallow waters just off the shore but as they grow, they move deeper in the waters. Adults dwell deep on the bottom by day and come towards the surface at night to feed due to their sensitivity of light. 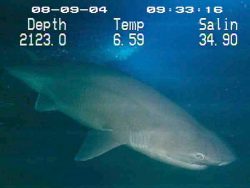