The bonnethead shark is a small hammerhead shark found in the Americas, in both the Atlantic and Pacific Oceans. It has a smooth, shovel-like head and the smallest cephalofoil of all hammerheads. They’re usually about 1 meter long, but can grow up to 1.5 m, with females being larger than males. This is the only species that exhibits sexual dimorphism in their hammerhead. Males have bulge in the middle of the cephalofoil that develops when they become sexually mature.

This species is gregarious and adults assemble in groups of 5 to 15. They feed mostly on crustaceans. They use the electroreception organs on their hammer head to find animals hiding under the sediment. They also eat cephalopods and bony fish on occasion. Young ones also eat seagrass, but it’s unclear if they do it un purpose. Their teeth are sharp on the front to grab soft prey, and broad in the back to crush prey with hard shells.

Bonnetheads are viviparous and give birth to 6 to 9 live young in the early summer or late fall. This species is also capable of asexual reproduction, but it’s unknown how often this happens in the wild. Their gestation is period is about 5 months, one of the shortest among all hammerheads.

The species is still abundant and is considered a species of least concern and as it’s not currently overfished.

Do you have images or videos of Bonnethead Sharks?
Submit them to info@sharkwater.com. 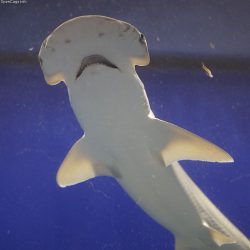