About the Bramble Shark

The Echinorhinus brucus shark, also known as the Bramble Shark, Spinous Shark, or Spiny Shark, is a rare, large, sluggish, deepwater shark found mainly on continental and insular shelves and upper slopes at depths of 400-900 m (1,300-3,00 ft). This kind of shark has been sporadically recorded, usually alone. It reaches a large size and although very little is known of its history, it is likely to be a slow-growing, late-maturing species. Their size at birth ranges from 29 to 90 cm. Mature individuals can be up to 150 cm for males and 213 cm for females.

Echinorhinus brucus has thorn-like denticles on the body which are very large (up to 15mm in adults). Their dorsal surface is usually dark purplish-grey to brown with white denticles, the ventral surface tends to be paler, and the sides and back of their bodies may have dark spots. The tooth count ranges from 20 to 26 and has a relatively short snout and stout body just like other members of the family. Brambles are ovoviviparous, with 15-26 pups in a litter, their gestation period and reproductive cycle are unknown. The bramble shark feeds mainly on smaller sharks, bony fish, and crabs. It’s not known to pose a danger to humans, and there are no records of attacks.

It is caught incidentally by commercial fisheries in bottom trawls and on fishing lines. In the eastern Atlantic, this species is processed into fishmeal but has little commercial significance. Its liver, on the other hand, is of high value in South Africa as medicine.

Historical accounts suggest that bramble shark numbers in the northeastern Atlantic have fallen markedly, although their current population is unknown, the decline in their population has been attributed to fishing pressure. Deep-sea sharks generally have slow growth rates and long lifespans.

Do you have images or videos of Bramble Sharks?
Submit them to info@sharkwater.com. 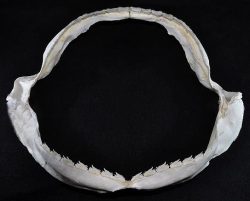