Brown lanternsharks can be found in the Western Pacific Ocean off the coast of Japan to New Zealand at depths from 402 to 1,380 m. But they frequently swim at 900 m below the surface of the water.

Their dermal denticles are tiny and densely placed with no pattern. Each denticle has four corners with narrow and slightly curved points. A female’s denticle is firmly attached while a male’s can be easily removed. Brown lanternsharks have a horizontal black line on the base of the tail and a light black mark on their pelvic fins.

The maximum length for a male is 64 cm while a female grows a bit longer to a maximum of 75 cm.

Brown lanternsharks mainly feed on bony fish, cephalopods like squid and crustaceans such as shrimp.

The IUCN lists Brown lanternsharks as data deficient, and there are no conservation measures for these sharks. However, there are restrictions in southern Australia on bottom trawling below 700 m and quotas on deepwater dogfishes.

Do you have images or videos of Bristled Lanternsharks?
Submit them to info@sharkwater.com. 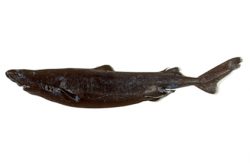