About the Broadnose Sevengill Shark

The Broadnose sevengill shark is a large seven-gilled — the most gills in any shark — cowshark with a wide head and short, blunt snout. They are related to sharks that lived in the Jurassic Period about 300 million years ago.

They prefer tropical temperate, shallow waters and can be spotted near the waters of Brazil, Argentina, South Africa, Japan, New Zealand, Canada, and Chile.

Broadnose sevengill sharks can grow to a maximum length of 2.9 m. Females grow longer than its male counterparts. A fully grown female is 2.2 m long, while a mature male is 1.5 m long.

They hunt in packs and can swim very fast when attacking their prey. They feed on anything such as other sharks, rays, chimaeras, bony fish, hagfish, dolphins and porpoise meat, seals, shark egg cases and sea snails.

Like other animals, these sharks can be aggressive if provoked.  Broadnose sevengills have been involved in several shark attacks off the coast of California and South Africa.

Broadnose sevengill sharks are ovoviviparous, where the female carries her eggs within her body until they hatch after 12 months. They have relatively large litters with a record high of 82 pups. Mature females have many eggs in their ovaries that could range from 67 to 104 eggs.

Broadnose sevengill sharks are fished intensively for human consumption and for sport. Their skin is used to make leather and liver as a source of oil in China. They use inshore bays as nurseries which may be threatened because of pollution.

The IUCN lists Broadnose sevengill sharks as data deficient. There is one protective measure in a marine reserve in South Africa.

Do you have images or videos of Broadnose Sevengill Sharks?
Submit them to info@sharkwater.com. 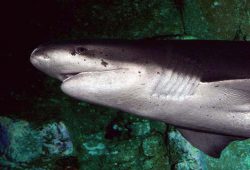 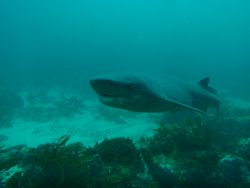