The Haploblepharus Fuscus, also known as the Brown Shyshark or plain happy, is a species of catshark, part of the Scyliorhinidae family. This species is endemic to the shallow, coastal waters of South Africa.

Their reproduction is oviparous, with females deposing egg capsules two at a time. In captivity, the whelks Burnupena papyracea and B. lagenaria have been documented piercing the egg cases and extracting the yolk.

This shark is known to feed on bony fishes and lobsters. Like its relatives in the genus, it exhibits a curious response of curling into a ring with its tail covering its eyes when threatened.

This species prefers inshore rocky reef habitats. All specimens examined by human were collected very close to shore. Endemic to a relatively small stretch of the South African coastline, ranging from Storms River mouth, and eastern Western Cape, to just south of Durban in KwaZulu-Natal.

The biology of this species is virtually unknown, which is of concern given that this is an inshore shark and caught with relatively high frequency by shore anglers in the Eastern Cape. The gathering of biological data for this species should be considered a priority is given that it is an endemic with a restricted range. Education and awareness are recommended, to reduce/prevent persecution.

Do you have images or videos of Brown Shysharks?
Submit them to info@sharkwater.com. 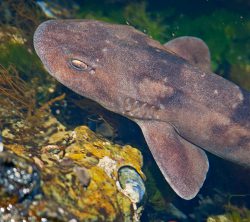