The brown-spotted catshark is a species of ground shark found in the Indo-West Pacific. Like all members of the catshark family, they’re bottom feeders, have elongated cat-like eyes, and two small dorsal fins set far back. They’re mostly nocturnal and often sleep in groups during the day. Their diet consists of bony fishes and bottom-dwelling crustacean and cephalopods.

Very little is known about them. They’re thought to be oviparous, like other catsharks. The largest specimen ever recorded was 36 cm long.

Their name comes from the spots along its dorsal side.

Do you have images or videos of Brownspotted Catsharks?
Submit them to info@sharkwater.com. 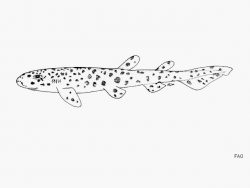