About the Bull shark

The Bull shark is a massive shark found in both tropical and subtropical waters. Bull sharks are commonly reef-associated but they have a widespread population over warm oceans, rivers and lakes. They are native to a variety of places in the Western Atlantic and can also be found in freshwater rivers in West Africa. Its freshwater habitats are more vulnerable to negative human impact and habitat modification. Despite protections, finning continues to be a big issue for the bull shark.

The Bull shark has a short, broad and blunt snout, small eyes and triangular saw-edged upper teeth. The common length of a Bull shark is 2.6 m but a male can get up to 3.6 m and a female can grow to 4 m in length. The max weight of a Bull shark that was published was 316.5kg. They can live up to 32 years.

Females give birth to live pups. Litters can be up to 13 young. The size at birth is 55 – 80 cm. They reach sexual maturity at 10-15 years, when they are between 1.6 to  2.3 m long. In the western North Atlantic young are born in late spring or early summer. Off the Nicaragua coast female Bull sharks may have young throughout the year having a peak in spring and early summer. Their gestation period is 10 to 11 months.

The Bull shark is a migrating sharks that goes north during the summer and south when temperatures cool. They are capable of covering 180 kilometres in 24 hours, and can move between fresh and saltwater at will. Bull sharks inhabit shallow waters especially in bays, estuaries, rivers, and lakes at depths ranging from 1 to 152m but usually 1 to 30m. The Bull shark feeds on bony fishes, other sharks, rays, mantis shrimps, crabs, squid and turtles. They are potentially dangerous to man, one the most aggressive species of tropical shark. It has been repeatedly implicated in attacks on humans but freshwater attacks are extremely rare.

Do you have images or videos of Bull sharks?
Submit them to info@sharkwater.com. 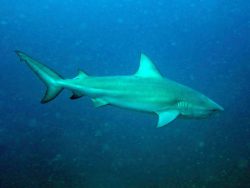 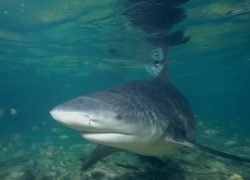 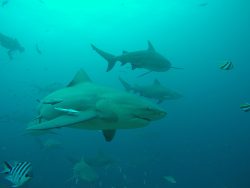