About the Burmese Bamboo Shark

The Burmese bamboo shark is bottom dwelling tropical shark that is native to the Eastern Indian Ocean, off Rangoon and Burma.

This species is part of the Carpet and bamboo shark family.

The young are produced by means of eggs that are hatched after they have been laid by the parent. During the development period inside the egg the embryos feed solely on yolk.

The Burmese bamboo shark feeds on small bony fishes near the bottom of the body of water.

Do you have images or videos of Burmese Bamboo Sharks?
Submit them to info@sharkwater.com. 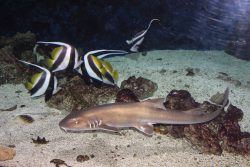