About the Chilean Angelshark

The Chilean angelshark is a shark species found in the Eastern Pacific, from Colombia to Chile. It lives on the continental shelf at depths of 30 to 75 m. It is one of several similar angelsharks in the region.

Like all angelsharks, they have a flattened body and broad pectoral fins, which make them resemble rays.

They’re ovoviviparous, but litter sizes are unknown. Adults can be up to 150 cm long.

Do you have images or videos of Chilean Angelsharks?
Submit them to info@sharkwater.com. 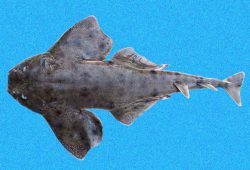