About the Cloudy Catshark

Cloudy Catsharks can be found off the coasts of Japan, Korea, China and the Philippines. They are bottom dwellers that inhabit rocky reefs in the Northwestern Pacific Ocean. They can be found at least at depths of 320 m below.

Cloudy catsharks are relatively small and grow up to 50 cm in length. They have a narrow head with a short blunt snout, no grooves between their nostrils and mouth and furrows on the lower but not the upper jaw.

They have extremely rough skin and colouration consisting of a series of dark brown saddles along its back and tail, along with various darker and lighter spots in larger individuals. Their medium-sized eyes are horizontally oval and like many sharks, have nictitating membranes followed by moderate spiracles.

Their diets consists of molluscs, crustaceans and bony fish.

Cloudy catsharks are oviparous and may therefore be more productive than larger live-bearing sharks. Females lay encapsulated eggs two at a time in nursery areas. Young cloudy cat sharks are about 8 cm long. Males mature at 41 to 48 cm, while females mature at 39 cm. The size of maturity appears to increase with declining water temperature.

The IUCN lists cloudy catsharks as least concern. They are incidentally captured by commercial trawl, nets, bottom gill-nets and bottom longing fishing and then usually discarded.

Do you have images or videos of Cloudy Catsharks?
Submit them to info@sharkwater.com. 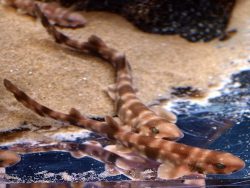