About the Cookiecutter Shark

The Cookiecutter shark, also called the cigar shark, is a species of small dogfish shark in the family Dalatiidae.

The cookiecutter shark has an elongated, cigar-shaped body with a short, bulbously rounded snout. The large, oval, green eyes are placed forward on the head, enough to allow the shark to have binocular vision. The upper jaw has 30 – 37 seven tooth rows and in the lower jaw, there are 25-31 tooth rows. The name “cookiecutter” refers to its feeding habit of gouging round plugs as if cut out with a cookie cutter. The pectoral fins are short and trapezoidal in shape. Two spineless dorsal fins are placed far back on the body, the second being larger than the first one. There is no anal fin, and the caudal fin is broad, with the lower lobe almost as large as the upper, which has a prominent ventral notch. The fins have translucent margins, except for the caudal fin. Complex, light-producing organs called photophores densely cover the entire underside, except for the collar, and produce a vivid green glow. The maximum recorded length for this species is 42 cm for males and 56 cm for females.

The Cookiecutter shark regularly replaces its teeth like other sharks but sheds its lower teeth in entire rows at the time. Unlike other sharks, the retina of the Cookiecutter shark has ganglion cells; a type of neuron located near the inner surface of the retina of the eye concentrated in a concentric area rather than a horizontal streak across the visual field; this may help to focus on prey in front of the shark.

The Cookiecutter shark technically feeds on any medium to large oceanic animal that shares habitat with this species. Bite marks have been found in the following species; cetaceans, pinnipeds, dugongs, sharks, stingrays, and bony fishes. It also hunts and eats entire squid.

Like other dogfish sharks, the Cookiecutter shark is aplacental viviparous, with embryos being sustained by the yolk until birth. Females have two functioning uteri and give birth to a litter of 6 – 12 pups. Newborn sharks measure 14 – 15 cm long. Males attain sexual maturity at 36 cm TL and females at 39 cm TL.

The Cookiecutter shark is a widespread oceanic species that occur mainly in temperate and tropical waters. Based on catch records, this species appears to conduct a diel vertical migration up to 3 km each way. It spends the day at depths of 1000 – 3,700 m, and at night it rises into the upper water column, usually remaining below 85 m. This species may be more tolerant to dissolve oxygen levels than other sharks in the related genera. Its distribution goes from Western Atlantic (the Bahamas and Southern Brazil), Eastern Atlantic (Cape Verde, Guinea to Sierra Leone, Southern Angola and South Africa, and Ascension Island), Indo-Pacific (Mauritius to New Guinea, Lord Howe Island, and New Zealand, North of Japan, and east of Hawaiian Islands), and Eastern Pacific (Easter Island and the Galapagos).

This species is not of commercial value because of its small size and it is occasionally taken by fisheries. There are currently no conservation measures in place for this species.

Do you have images or videos of Cookiecutter Sharks?
Submit them to info@sharkwater.com. 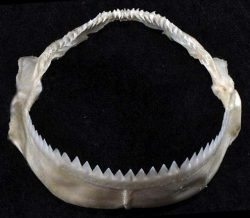