About the Coral Catshark

The Coral Catshark is a species of catshark, part of the family Scyliorhinidae. It is common in shallow coral reefs across the Indo-West Pacific Ocean, from Pakistan to New Guinea.

The Coral Catshark has a slender, cylindrical, firm body and a short and narrow head. The snout is short and slightly flattened. The eyes are horizontally oval and are protected by nictitating membranes. The long, angular mouth has very long furrows that extend onto both the upper and lower jaws. The pectoral fins are fairly large. The first dorsal fin is angled backwards and the second dorsal fin is similar in shape but smaller. Adult males have thin, tapering claspers that extend about two-thirds of the distance between the pelvic and anal fins which is much smaller than the dorsal fins. The elongated body of this species allows it to move into and through small spaces in the reef environment. It is primarily crepuscular and nocturnal, with active foraging activity beginning in the afternoon and ending before sunrise. This species feeds mainly on small benthic invertebrates and bony fish. The Coral Catshark is oviparous, with females producing eggs two at a time. The females deposit the eggs on the bottom, rather than attaching them to vertical structures. The eggs hatch at 4-6 months at 26 C and newly hatched sharks measure 10- 13 cm TL. Newly hatched sharks are born with a contrasting dorsal pattern of light and dark vertical bars. After three months their colouration fades to match that of the adults. Males and females attain sexual maturity at around 47-62 cm TL and 49-57 cm TL, respectively. This species grows up to 70 cm long.

This species is the most widely distributed member of its genus, the Coral Catshark can be found from Pakistan and India to Southeast Asia and Taiwan. Common and bottom-dwelling in nature, the coral catshark inhabits inshore coral reefs at depths not exceeding 15 m.

Habitat destruction within its range and increasing fishing pressure are likely to represent significant threats to this species. Protection of the natural habitat of this species and education should be considered in the future for such coral-dwelling species in the region. This species is described by the IUCN Red List as Near Threatened.

Do you have images or videos of Coral Catsharks?
Submit them to info@sharkwater.com. 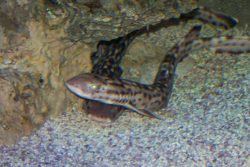 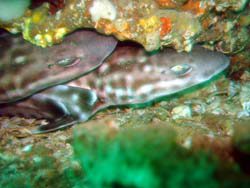 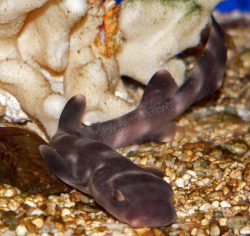