About the Crescent Bullhead Shark

This species also known as The Crescent Bullhead Shark is an uncommon species of bullhead shark that belongs to the Heterodontidae family.

This species is oviparous, paired eggs are laid. Embryos feed solely on the yolk. Distinct pairing with embrace. Females produce 10 – 16 eggs per year during late winter in July and August, though Michael noted that egg-laying may continue year-round. Young is reported to hatch at about 22 cm TL.

Habitat:
The range of the Crested bullhead shark is restricted to the warm temperate water along the eastern coast of Australia, from Cape Moreton, Queensland, to Batemans Bay, New South Wales to a depth of 93 m. Also dubious records of the species from off Cape York Peninsula in the north and Tasmania in the south. This species is found around rocky reefs, among large macroalgae, and on seagrass beds.

Behavior:
The Crested Bullhead Shark is a slow-moving, nocturnal species often seen wedging its head between rocks in search of food. It feeds primarily on the sea urchins Centrostephanus rodgersii and Heliocidaris erythrogramma but has also been known to take a variety of other invertebrates and small fishes.

Conservation:
The Crested Bullhead Shark is likely to occur in a number of marine protected areas including Queensland’s Moreton Bay Marine Park at the northern extent of the species’ range, and several marine parks in New South Wales.

Do you have images or videos of Crescent Bullhead Sharks?
Submit them to info@sharkwater.com. 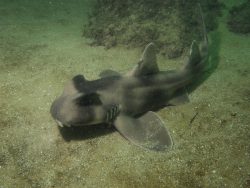 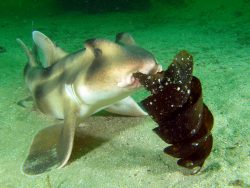