About the Crested Bullhead Shark

The Crested bullhead shark is a fairly uncommon species of bullhead found in eastern Australia, at depths of around 93m. Like other bullheads, this species is a tropical and sub-tropical bottom feeder of relatively modest size. The Crested bullhead is quite distinct from other members of the Heterodontidae family due to the prominent ridges on its head, above the eyes, from which it takes its name. Their diet consists mostly of sea-urchins, which stain their teeth purple, but they also eat invertebrates, small fishes and the eggs of other sharks, notably the Port Jackson shark.

They’re oviparous and females produce 10-16 eggs per year but the average litter size is unknown. Pups born in the wild are round 22cm in length. Females reach maturity at 70cm and males at 60cm. The maximum length for this species is recorded as 1.2m, although more recent observations suggest they could grow up to 1.5m.

There is not enough confirmation to assess their population health, as bycatch reports do not distinguish the Crested bullhead from the similar Port Jackson shark. They do, however, have a high survival rate after being caught and re-released. This, coupled with the fact they are not actively targeted by commercial fisheries, means that their conservation status is “Least Concern”.

Do you have images or videos of Crested Bullhead Sharks?
Submit them to info@sharkwater.com. 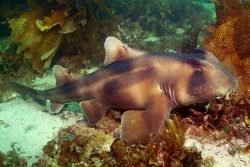