About the Cuban Dogfish

The Cuban dogfish is a shark species found in the Western Atlantic from Florida to Argentina. It is most commonly seen in warm tropical waters. It lives at depths of 60 to 400 m. Their diet consists of bottom fishes and invertebrates. They’re also known to be hosts to isotope parasites, which are relatively large and attach themselves to the shark’s mouth and gills.

Cuban dogfish are ovoviviparous and their average litter size is 10. They reach a maximum length of about 110 cm.

They’re not used for meat but are sometimes extracted for liver oil. Their populations must be monitored as deepwater fisheries expand, but at the moment there isn’t enough information to assess population health. They’re considered Data Deficient.

Do you have images or videos of Cuban Dogfishs?
Submit them to info@sharkwater.com. 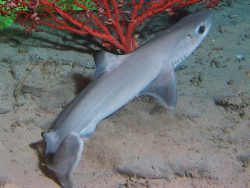