The Draughtboard Shark is a species of catshark and part of the family Scyliorhinidae. Named because of its “checkerboard” colour pattern of dark blotches. This species is endemic to New Zealand, where is also known as the carpet shark.

Most of the Draughtboard sharks measure no more than 1 m long, although very rarely an individual can reach 1.5 m long with a maximum recorded size of 2.4 m long. This shark has a stocky body. The head is short, short and somewhat flattened, with a rounded snout. The nostril has a triangular flap of skin in front, and the eyes have nictitating eyelids and placed on top of the head. The mouth is large and curved, without furrows in the corners with the upper teeth exposed when the mouth is closed. Both of the dorsal fins are placed far back on the body, with the first one originating above the pelvic fin and the second above the anal fin. The caudal fin is short and broad. During the day, the Draughtboard shark is lethargic and typically hides inside caves on the reef. At night, it emerges for food over nearby sandy flats. This species feeds on a variety of food, including spiny dogfish, cod, octopus, squid, crabs, spiny crabs and even sea squirts.

The Draughtboard shark is only found in the coastal waters around New Zealand. It typically occurs at depths of 0-400 m on continental and insular shelves. This shark is a bottom-dweller that favours rocky reefs and adjacent areas. Adult males and females segregate from each other.

This species is frequently caught as bycatch in trawl and rock lobster fisheries. However, there are no indications that these fisheries have any impact on the population. There are no current conservation measures in place for this species, therefore, the IUCN classifies this species as Least Concerned.

Do you have images or videos of Draughtsboard Sharks?
Submit them to info@sharkwater.com. 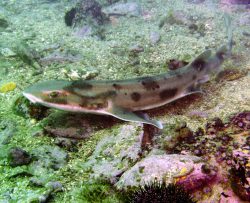 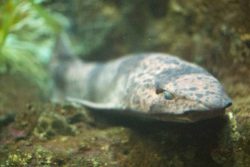