About the Dusky shark

The dusky shark, or shovelnose shark, is a large shark species known to have the strongest bite of any shark, being able to produce 60 kilograms of force. The Dusky shark is found in coastal and offshore waters but not in oceanic waters. They are saltwater and reef-associated sharks that undertake long temperature-related migration. The Dusky shark has a wide range. They are found in Western Atlantic, Eastern Atlantic, Indo-West Pacific and Eastern Pacific. Dusky sharks’ fins are highly valued and sought after. Their population numbers are declining due to the fact that both fins and meat are sought-after commodities.

The dusky shark has a broadly rounded snout, triangular saw-edged upper teeth and curved pectoral fins. They are one of the slowest-growing, latest-maturing and have a very long gestation period. The Dusky shark has a max length of 4.2 meters but their common length is about 2.5 meters. The maximum known weight is 346.5kg. They have been know to live up to 40 to 50 years.

They are viviparous and the mother gives birth to live developed young shark with litter sizes from 3-14. The young develop in the mother for a period of 16 to 22 months. Shark pups are 70 to 100 cm at birth and become mature when they reach 220 to 300 cm.

Dusky sharks bites on humans have been reported. They have also been known to follow ships that are leaving offshore areas at times. They feed on bottom fish like bony fish, sharks, skates and rays. They stay in a depth range of 0 to 400m and are most commonly found at depths of over 200 m.

Do you have images or videos of Dusky sharks?
Submit them to info@sharkwater.com. 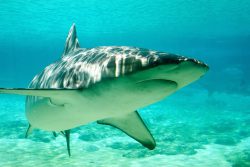 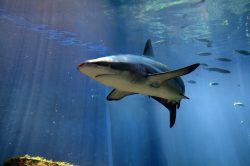