About the Eastern Angelshark

The Eastern Angel Shark is an endemic species, meaning that it lives only in one place. In this case, they are found solely on the east coast of Australia, between Cairns in Queensland and Lakes Entrance, Victoria.

They are yellow-brown to chocolate brown in colour and have a flat, wide body like other Angel Sharks. Males grow up to 110cm in length whereas females can reach up to 130cm. They can have up to 20 pups per litter, but not much is known about their gestation period. It is estimated to be around 10 months, based on data from other similar sharks.

This mysterious shark spends much of its time on the ocean floors, where its diet most likely consists of bony fishes, crustaceans and cephalopods, like squid. Due to their fondness for lying in the sand, they are highly susceptible to becoming trawler by-catch and it is estimated that there has been a 96% decline in population between 1977 and 1997. They are currently categorized as vulnerable by the ICUN.

Do you have images or videos of Eastern Angelsharks?
Submit them to info@sharkwater.com. 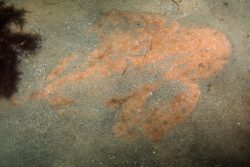