About the Epaulette Shark

The Epaulette shark is a shallow water, reef-associated, tropical shark occurring in the Western Pacific, in areas like New Guinea and northern Australia. The Great Barrier Reef has a large population of the Epaulette Shark, with part of the population on a small portion of Heron Island Reef. They are also often found in tide pools. In New Guinea the species is threatened by overfishing, destructive fishing practices and habitat modification, including the damage and destruction of coral reefs from dynamite fishing and pollution.

The Epaulette shark has the ability to survive low oxygen conditions by the switching of non-essential brain functions, which is helpful when hunting in tide-pools with low oxygen. They are also well camouflaged, with dark brown splotches all over the body.

Epaulette sharks are viviparous and eggs hatch in the water. During the development period inside the egg the embryos feed solely on yolk. Two egg capsules are produced and placed among coral at night. A pair of egg capsules may be produced every 14 days, resulting in up to about 20 potential offspring per female. The eggs hatch after about 120 days with a size at birth around 14 to 16 cm. They become mature at about 60 cm in length and can grow up to 105 cm.

Do you have images or videos of Epaulette Sharks?
Submit them to info@sharkwater.com. 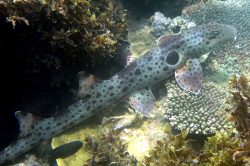 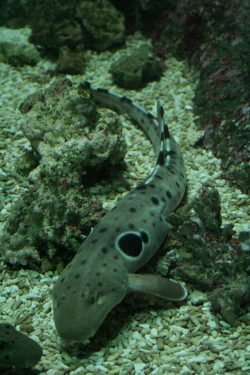