About the False Catshark

False Catsharks are large deepwater sharks with a wide range around the world at depths between 100 – 1,890 m occurring around seamounts, troughs and deepwater reefs. Even though their range is wide, false catsharks are uncommon are bycatch from fisheries and are rarely spotted.

False catsharks vary in colour, some are dark brown and others are light grey. They have a broad head with a short, rounded snout with a large mouth that has over 200 rows of tiny teeth. Their eyes are long and narrow with nictitating membranes. The most distinctive feature of false catsharks are their long, low first dorsal fin.

The anatomy of false catsharks gives the impression that this species leads a sluggish lifestyle.

They mainly feeds on bony fish such as cutthroat eels, grenadiers and snake mackerel and sometimes lanternsharks, squids, octopus and some shrimp.

False catsharks are viviparous with low fecundity at two to four pups in a litter. Females are presumed to have a long gestation period at over a year to three years. The size at birth ranges between 120 to 150 cm long. False catsharks have a slow growth rate: males mature at approximately 260 cm long while females mature around 265 cm long.

Males grow to a maximum length of 269 cm while female can reach 295 cm long.

The IUCN lists false catsharks as least concern and there are no conservation methods in place.

Do you have images or videos of False Catsharks?
Submit them to info@sharkwater.com. 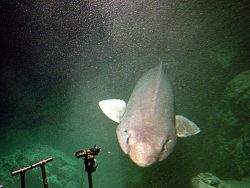