Filetail Catsharks are small, soft bodied deepwater sharks that live between 88 to 1250 m deep in the Eastern Pacific Ocean.

Their body has adapted to the deepwater environment. Filetail catsharks have large, oval-shaped eyes because of the darkness of the deepwater and they have larger gills for the lower oxygen levels underwater.

Adult filetail catsharks are commonly found near rocky vertical relief over soft mud bottoms. They feed on a variety of small fish and invertebrates.

Filetail catsharks are oviparous and females lay eggs in pairs. Eggs are laid throughout the year, mostly from July to September, which indicates that filetail catsharks have high fecundity, but gestation period can reach up to 24 months. Hatchlings are seven to nine cm long at birth. Males mature between 37.5 to 45 cm long, while females mature between 42.5 to 50 cm in length. They can grow up to 60 cm long.

The IUCN lists filetail catsharks as least concern, and there are no species-specific conservation methods in place.

Do you have images or videos of Filetail Catsharks?
Submit them to info@sharkwater.com. 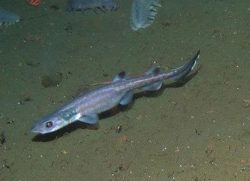 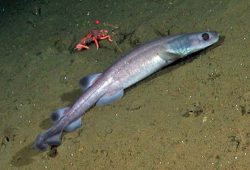