About the Frilled Shark

The Frilled Shark is a deep-water shark. It’s been called a living fossil due to its similarity to prehistoric sharks.

Its elongated body makes it look like a mix between an eel and a shark.

Its body is perfectly adapted for life in the deep sea. Its liver is very large and full of fat, which allows it to maintain its position in the water column.

Its jaws are distensible and its many thin, curved teeth are very effective at catching soft prey such as squids.

The frilled shark has the longest gestation period of all vertebrates. It can take up to 3.5 years for it to give birth to their pups. Litter sizes vary from two to fifteen.

Frilled sharks are caught by commercial fisheries that use trawls, gillnets, and longlines. Low reproduction rate makes it vulnerable to overfishing.

Do you have images or videos of Frilled Sharks?
Submit them to info@sharkwater.com. 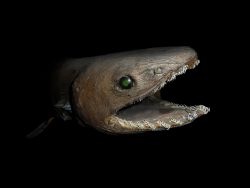