About the Galapagos Shark

The Galapagos shark is a reef-associated tropical shark found close inshore as well as offshore,  commonly in clear waters with coral and rocky bottoms. The Galapagos shark prefers waters around oceanic islands. Native to the Eastern Atlantic, Western Indian Ocean and the Western and Eastern Pacific. This shark can be found in areas like Walter’s Shoal, south of Madagascar and the Middleton and Elizabeth Reefs. This species is at risk due to the uncontrolled legal and illegal shark fin fishing taking place in Galápagos Marine Resources Reserve where a significant population occurs.

The Galapagos shark is dark grey above, light below as well as slightly dusky tips on fins. The average length for this shark is about 300 cm, but it can reach a max length of 370cm and max weight of 85.5kg and can live up to 24 years. Although a coastal species, it is capable of crossing considerable distances of open ocean between islands. It feeds mainly on bottom fishes, and also squid and octopus. While in the Galapagos Islands it preys on sea lions and marine iguana. The Galapagos shark has a depth range of 1 to 286m but commonly swims in depths of 30 to 180m. This species is know to be aggressive and when threatened.

Galapagos sharks give birth to live young, usually 6 to 16 pups per litter. The size of the young at birth range from 57 to 80cm in length.

Galapagos sharks have poor rebound potential and are susceptible to overfishing. They’re currently near threatened and could become threatened soon if not protected.

Do you have images or videos of Galapagos Sharks?
Submit them to info@sharkwater.com. 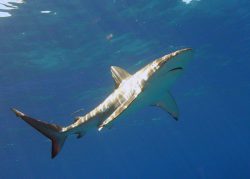 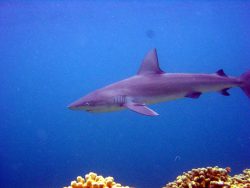 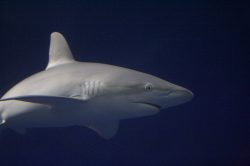