About the Goblin Shark

The Goblin Shark is the only living member of the family Mitsukurinidae, which has existed for around 125 million years. This impressive ancient lineage has earned it the nickname the ‘living fossil’. This rare, deep-dwelling, species has a global range and is usually found on upper continental slopes and in submarine canyons at depths of at least 100m. They usually grow to between 3 and 4 meters but a female measuring around 6 meters was caught in 2000, suggesting they are capable of growing much larger.

Goblin sharks are highly unusual in appearance due to their long flat noses and prominent jaws which can be catapulted forward to capture prey. Whilst in their usual resting position, the jaws are held taut by two pairs of elastic ligaments. When a Goblin Shark bites, the tension in these ligaments is released and the jaws suddenly protrude forward, almost to the end of the snout. Their noses are covered in electroreceptors called Ampullae of Lorenzini. These help Goblin Sharks detect the electric fields produced by the movement of other sea creatures and potential prey. They subsist on a diet of bony fishes, crustaceans and cephalopods, like squid. They may be ambush predators.

Goblin sharks appear to be pink due to the blood vessels visible through their translucent skin. They are born almost white but darken with age. They are flabby with small fins which suggests they are slow and sluggish. Their flesh and bones are low density and they have large oil livers which all aid buoyancy. This could help Goblin Sharks float towards their prey with minimal movement. Their reproduction is ovoviviparous, meaning that they lay eggs, but these remain inside the mother until the sharks are fully developed and then there is a live birth. It is not known how long Goblin Sharks live or how fast they grow. They are currently categorized as ‘least concern’ by the IUCN due to their limited contact with humans and their presence in all three major oceans.

Do you have images or videos of Goblin Sharks?
Submit them to info@sharkwater.com. 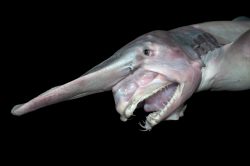 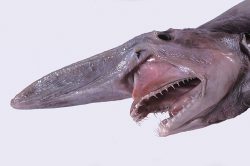