About the Great Hammerhead Shark

The great hammerhead is the largest hammerhead in the world. Adult males are usually 4 meters long. The biggest specimen ever recorded was 6.1 meters long. Great hammerheads are highly migratory and can be found in coastal warm temperate waters and tropical seas. They’re most commonly found at the bottom of waters up to 80 meters and in reefs. Their main prey is rays, groupers, and sea catfishes. Their only known predators are killer whales, but other sharks such as the bull shark might hunt young hammerheads.

The hammerhead is useful in finding prey that hides in the sand, particularly rays. On the underside of the head, there are hundreds of small organs called the ampulla of Lorenzini. They help the shark find rays by detecting their electrical signatures. Every living animal gives off an electrical current that sharks can detect in the water.

Great hammerheads are a viviparous species; females can give birth to up to 40 pups in a single litter after a gestation period of 11 months. Despite giving birth to many pups, only a few survive to adulthood, and once they’re mature they only reproduce every one or two years.

They’re recognizable by their sickle-shaped dorsal fin and their straight head. Other species of hammerhead have a curved head.

Great hammerheads using their “hammer”. They’re known to strike rays from above and to pin them down using their head. They also seem to prefer to immobilize them by biting part of their fins off. Once they’re incapacitated the hammerhead proceeds to eat the rest of their body. Stingray venomous spines are often found inside hammerhead mouths, but they don’t seem to bother the shark.

Great hammerheads are caught as bycatch, mostly in tuna fisheries. Target fisheries exist in nurseries. Their long fins are highly prized in the shark fin trade. They are also utilized for meat, leather, and liver oil.

They’re an endangered species due to their high by-catch mortality and slow reproduction. They’re listed in CITES Appendix II, which makes it illegal to export them without a permit. Despite these commitments, there are no known international protection initiatives in place for great hammerheads

Do you have images or videos of Great Hammerhead Sharks?
Submit them to info@sharkwater.com. 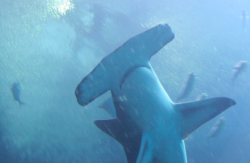 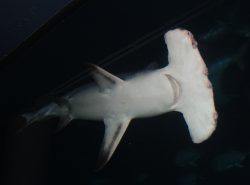