About the Great White Shark

The Great White Shark is the world’s greatest predator. Females can reach lengths of over six meters and weigh up to two tons. Males are slightly smaller, usually not growing past the five-meter mark. They’re the third largest shark after the whale shark and the basking shark. Their identifiable by their large conical snout, large teeth, long gill openings, a mouth that extends beyond the eyes, and their white underside.

They’re found worldwide in waters with temperatures between 12 and 24 degrees Celsius, but they’re most commonly seen in South Africa, Australia, and the United States.

Every part of their biology is adapted to hunting. They have an amazing sense of smell that can find a drop of blood in 100 litres of water. They can even stick their head out of the water to smell the air and find prey such as seals. Their eyes give them a sharp vision. During hunts, the eyes roll backwards to protect the cornea from thrashing animals. Great whites, like all sharks, have an additional sense humans don’t have: they can detect the electromagnetic fields emitted by the muscle contractions of living animals. This allows them to find animals by sensing their heart contraction.

Great whites exhibit countershading. Their underside is white and their dorsal area is grey or sometimes blue. This makes it hard to spot in the water as the different colours break the outline of its shape when seen from the side. From above, their dark colouration blends in with the bottom of the ocean, making them very difficult to spot.

Their teeth are serrated and are replaced periodically. They have about 300 teeth at any given time. When a great white has prey in its mouth it shakes its head sideways to help its teeth slash the flesh of its prey. This is particularly helpful when hunting fat and fleshy prey such as seals and sea lions.

Their favourite prey items are mammals with lots of such of fatty tissue, such as cetaceans (dolphins and whales), pinnipeds (seals and sea lions), and otters, but they’re highly opportunistic and also known to hunt fish, including other sharks, sea turtles, and birds.

Great whites don’t seem to like the taste of humans. Most reported Great White-related incidents to involve a single bite, after which the shark loses interest and swims away. This could be a kind of “test bite” for the shark to figure out what their prey is. They’re also known to bite buoys and boats for similar reasons. But humans are too bony for their liking, and they’d rather eat prey with a higher fat-bone ratio.

Great Whites become sexually mature when they reach lengths of four to five meters. Males start breeding at about 10 years of age, and females do it when they’re 15.

Great whites are ovoviviparous and eggs hatch inside the mother and she carries them until they’re about 1.5m long. Once outside of the egg, pups survive by eating unfertilized eggs and other pups. 1-6 pups survive the 11-month long gestation period.

Great whites are listed in CITES Appendix II, which makes it illegal to trade them without a permit. Historically they have been hunted for sport, and for their jaws, fins, liver, meat, and cartilage.

Cage diving with great whites is available in several countries such as South Africa, Australia, New Zealand, and Mexico.

Do you have images or videos of Great White Sharks?
Submit them to info@sharkwater.com. 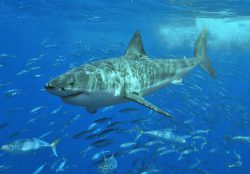 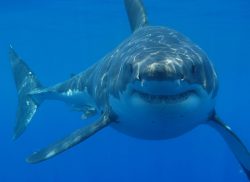 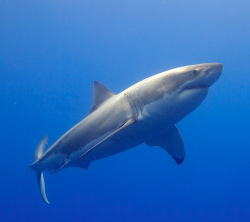