Longcomb Sawfish have multiple names such as: Green Sawfish, Narrowsnout Sawfish and Olive Sawfish. They are possibly the largest sawfish species where they can grow to lengths over 7 m, but currently, longcomb sawfish greater than 6 m are rare.

They were once found in the Indo-West Pacific off the coasts of Africa to Australia and Taiwan. Today, like many other sawfishes, they have disappeared from places they were once seen.

Longcomb sawfishes are dark grey to blackish brown above and off-white to yellowish underneath. They have between 23 to 37 teeth on each side of the rostrum. The teeth near the tip of their rostrum are closer together than the teeth at the base. They have relatively short pectoral fins.

They are often resting on the bottom with their saw elevated. They can live in colder waters than other sawfishes and are mainly found in coastal marine, mangrove and estuarine habitats. They can also be found in shallow waters and at 70 m deep below the surface of the water where there is sand or mud.

Longcomb sawfishes feed mainly on crustaceans and molluscs. They thrash their rostrum from side-to-side to find its prey at the seabed, to stun schools of fish and to keep predators away.

Longcomb sawfishes are ovoviviparous and pups at birth are between 60 to 108 cm long.

Female longcombs give birth at inshore areas and the young longcombs stay near the coast for the early years of their lives. Longcombs reach maturity around the age of nine at the length of 3.4 to 3.8 m. The maximum age is unknown, but they may exceed 50 years.

The IUCN lists Longcomb Sawfish as critically endangered. Not only are fisheries threatening populations of longcomb sawfish, they are threatening their habitats too. Because of their saw, longcombs are prone to being caught in fishing nets.

In Australia, longcomb sawfish are fully protected by a variety of Federal and State legislation. Sawfish are also protected in India, Bahrain and Qatar. 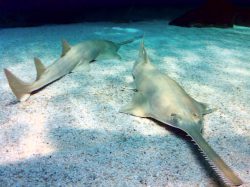 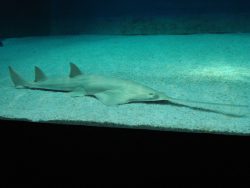