About the Greenland Shark

The Greenland Shark, sometimes known as the Gurry Shark or the Large Sleeper Shark (due to its sluggish nature), is native to the Arctic and North Atlantic. The Greenlandic Inuit call them Eqalussuaq in their language, Kalaallisut, and they have a number of myths and legends about these fascinating creatures.

The Greenland Shark is one of the largest species of shark that still exist today and have the longest known lifespan of any vertebrate species. It is estimated that these sharks can live up to 300 or even 500 years. In length, most adults range between 2.4m and 4.3 meters but can reach up to 6 or 7 metres. They weigh an average of 900 kilos. Despite their monstrous size, they pose very little threat to humans as they reside in freezing waters, between -2 and 7 degrees Celsius. Additionally, they’re slow. They have the lowest tail-beat frequency for its size across all fish species.

Their lack of speed is associated with their slow metabolism, growth rate and extreme longevity. It is estimated that Greenland Sharks grow at a rate of 1cm per year. They only reach sexual maturity at 150 years, which poses a challenge for the continuation of the species due to overfishing. Commercial hunting of these sharks ceased in 1960 but they are still classified as near threatened due to being accidentally caught as bycatch and due to their extremely slow rate of reproduction.

Greenland Sharks are scavengers. Although they are capable of short bursts of speed and have been known to ambush sleeping seals, they prefer to eat animals that are already dead. They are attracted to the smell of rotting meat and often subsist on drowned animals. They have been known to eat fish, seabirds, seals, small whales, horses and in one case, an entire reindeer was found in the stomach of a Greenland Shark.

The majority of these sharks are blind due to common parasites (Ommatokoita elongata) that attach themselves to their corneas. Fortunately, they do not need their sight to live in the dark depths of the ocean, where they predominantly rely on their sense of smell.

The flesh of the Greenland Shark is toxic due to a high concentration of trimethylamine N-oxide in their tissues. This is an evolutionary adaptation that aids buoyancy in deep waters. Inuit hunters treat and dry the meat in order to make it safe for human consumption, and avoid feeding it raw to their sledge dogs as cause symptoms akin to drunkenness.

Do you have images or videos of Greenland Sharks?
Submit them to info@sharkwater.com. 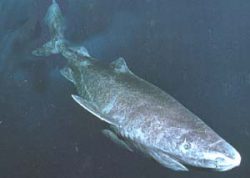 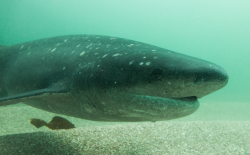