About the Gulper Shark

The Gulper Shark is a deepwater dogfish which can be found all over the world. They live between 100m and 1490m below the surface of the ocean. Like other species of Gulper Shark, they have large green eyes. They are a highly migratory species, which can make them difficult to track. They are around 90cm in length on average, with females usually measuring around 10cm longer than males.

Gulper Sharks can live for over 30 years, but females only become mature between 12 and 16 years of age, whereas males mature at around 7 or 8. They have a very long gestation period, meaning that it takes two whole years to produce one pup. They are categorized as vulnerable on the ICUN red list as they have a high chance of being caught by humans before they are able to reproduce and generally only produce between 2 and 10 pups in their lifetime.

Although they are fished for their meat and fins, they are primarily sought after for their extremely valuable liver oil, as they have larger livers than other similar types of dogfish.

Do you have images or videos of Gulper Sharks?
Submit them to info@sharkwater.com. 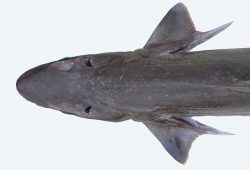